The memoir is about Leslie Morgan Steiner’s abusive relationship and marriage. The subject matter is grim but Steiner’s style is fluid, poetic and completely addictive (Started reading over the summer and went to lengths to find a copy in a PA library). It’s informative into why women stay with men who abuse them and why men may abuse.

If you or someone you know is being abused, speak out. Visit the National Domestic Violence Hotline online or by phone at 1-800-799-7233.

A hard life lesson I have learned: Don’t put expectations on things. People, books, movies…anything- it is just better that you don’t. Thus, they don’t meet or miss any expectation, and you are surprised when you approve of it. Unfortunately, I got caught-up in expectations for reading Dear John, because of the film adaptation.

Nicholas Sparks, author of Dear John, draws you into the world he creates. John, a army man, and Savannah, a college student, meet while spending their Summer in coastal North Carolina. They get to know each other, and proceed to fall in love. At the end of the Summer, John has to return to his base abroad, and Savannah returns to college. They believe they only have one year to wait to be together (When John’s enlistment expires), until September 11th happens…

The story was well and good beach reading until that point, then it took a turn for the worst. Sparks zipped through what could have cashed out as a very interesting perspective and went straight back to the love  theme –  using September 11th as a device to manipulate the relationship of John and Savannah. It was not disrespectful at all, and fairly realistic to the situation, but it was fleeting for an event that had such tremendous consequences non-fictionally and fictionally.

As for the movie, Channing Tatum and Amanda Seyfried are some of my favorite actors (well, eye candy for the former and actor for the latter…), and I enjoyed the movie much more than novel – especially the changes made to the conclusion.

This one took half the time it took to read Ghost World, and I enjoyed Scott Pilgrim’s Precious Life exponentially more. The movie version hits theaters in August, with Michael Cera in the title role, and few know that it’s a graphic novel series. How can it not be?! Everything about this story exudes graphic novel. Without a doubt, the selection of graphic novel does the story justice.

Bryan Lee O’Malley creates a world of action, love, and video games in a strange Canadian setting. Scott Pilgrim, in-between jobs 23-year-old, is looking for love and a change of pace. He finds what’s looking for in Ramona Flowers, a delivery girl with dimension-bending powers and seven evil ex-boyfriends. The only for way for Scott and Ramona to have a relationship is for Scott to defeat all of her ex-boyfriends- a task he is ready for.

Ah, the power of love. My biggest concern was Michael Cera playing Scott Pilgrim well. Scott Pilgrim is a confident slacker, and I foresaw Cera playing up the loser-side of Scott too much, but I was pleasantly surprised by Cera’s performance.

Maybe this was instilled in me from the summer reading program at my childhood library, but no matter the reason, I read with a goal in mind during the summer. I reached 25 books last summer, and this summer’s mission is 40 books. Good pacing for now…

Yes, like most movies, Ghost World was a book first. Specifically, Daniel Clowes’ Ghost World was a graphic novel. The artwork is beautiful and, when necessary, grotesque; exaggerating the most minuscule details. For me, the artwork was the redeeming feature of the novel, that kept me attracted to it. I believe that Ghost World became an icon in pop culture, for addressing adolescence in a snarky, counter-culture voice, because of the film version. Having never viewed the film, I can’t compare the two, but Ghost World’s story didn’t draw me in.

I am a stickler for an interesting plot; Not even a good plot, but one that will hold my attention to want to see it to the end (i.e- what I am going through with Under The Dome still). Reading Ghost World reminded me of the “Ferris Wheel” effect; starting at point A, going through a journey, and ending up in the same place. Evolution of the characters’ lives were subtle and satisfied me enough in the end. Not the best note of a summer reading challenge…

Whilst being home,  I decided that I really want to go graduate school for a Library and Information Systems Science Master’s degree.

No one thinks about becoming the Librarian while they grow-up. There are people who like to read, write and teach, but no one selects librarian as a career possibility which encompasses all three. The field is very up-and-coming, as 60% of the workforce will reach retirement age in the next decade, and digital media is an innovation to be banked on. This book focuses on how digital media is changing library use, and gave a secret view of the Secret Lives of Librarians. 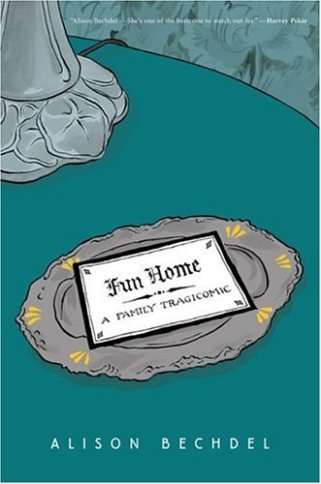 If you are ever in the mood for an obscure, independent film, try-out The Station Agent. The film was shot in my hometown, and I work at the library they filmed at. The portion they show of the library is half of the floorspace there. Being able to pick out the details of the movie is really cool, but mind-blowing. A sliver of my world being indirectly-documented in film history (Hey, that film won the same award as Juno, Precious and Ghost World) is nothing compared to what Alison Bechdel did to her hometown, and family in Fun Home: A Family Tragicomic.

As soon as I checked this graphic novel out, I knew that I was in for a ride. The librarian informed me that Bechdel grew-up in Lock Haven/Beech Creek, and she couldn’t believe the terrible “things” that “Ally” wrote about. The librarian watched Bechdel and her brothers grow-up in Beech Creek, and she was cryptic about the material of the novel. That seriously intrigued me. What great secrets were hidden in Beech Creek?

Bechdel transported the reader back to Beech Creek, circa 1970’s- her convoluted childhood with her distant mother and her closeted-homosexual father. Bechdel looks back on one Summer that, at the time, wasn’t extraordinary, but most exhibited the fractured pieces of her family. The story also follows her journey of discovering her sexuality- which has its “thunder” taken away when her father comes out as well (She knew him to always want to be the center of attention). It’s a story about hindsight, and what people should of knew, and maybe they did know, but didn’t want to acknowledge. A school teacher having affairs with young men in the Central Pennsylvania community that he grew-up in would just be preposterous.

Last Spring, I dated a local guy, and I met his humongous extended family. “Local” doesn’t begin to describe this guy’s connection to the area- “Native” would be more appropriate (He showed me a street that was named after his family). Fun House became very surreal when I recognized the last names Bechdel mentioned in the story- they were surnames of my ex’s relatives. Bechdel wrote candidly about the area, and questioned why her “metropolitan” father would stick around and settle himself for a life that his whole family already lived. She drew the area in the way, from my experiences, that I see it and how I saw my ex’s family (They were very nice, and I actually miss them more than I miss the ex); matriarch-centered and content with life in their town lines. Bechdel didn’t follow the life of her extended family though, and is the subject of gossip at the public library now.

Everyone has a story. Maybe it’s not cut-out for a movie deal, or bestseller’s list material, but, for every story you have, there is at least one interested listener.

Truer words have never been posted to the Internet.

Welcome to however you stumbled upon this page! My name is Cassidy – I am a library science student, user, and employee. This blog reflects my comings and goings with anything library-related. Brace yourself for other personal, but somehow related posts. The venn diagram of my life and libraries is a circle.

When I am not studying or working, I am often running or sewing animals.

Buckle in. We’re about to go on a magic carpet ride of wonders.