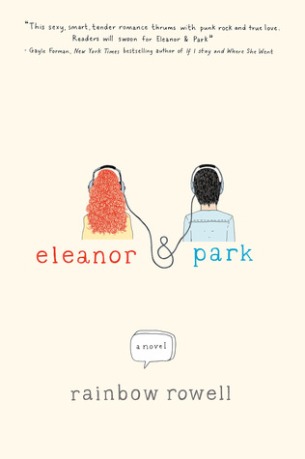 This book took the young adult/library reader’s advisory world by storm this past winter. All the librarians and bloggers out there were reading. Being at the point of midterms when it was most popular, I thought I could write off Rainbow Rowell’s Eleanor & Park until the summer. But John Green’s review in The New York Times convinced me to make it a spring break priority read. Green’s review, like others’, was vague and mysterious. They emphasize that the story is nothing that we’ve ever seen before, but seem to not go into detail about how it is so different. This is intentional. Like love its self, Eleanor & Park leaves you speechless and unable to accurately, wholly describe how it makes you feel the way you feel about it.

The year is 1986. Alan Moore’s Watchmen has just hit newsstands and The Cure is blasting on cassette players; Facebook and the Internet is years from being developed and mainstreamed. Eleanor and Park couldn’t be any different. Whereas Park is the “passably popular” half-Korean, half-Caucasian boy-next-door, Eleanor is the “big”, red-headed new girl in Omaha, Nebraska. Park comes from a stable household — Dad’s a Vietnam vet who met Park’s Mom during the war. Eleanor’s family (if it can be called that) life is a patchwork of abuse and dysfunctionality after the divorce of her parents and the recent marriage between her mother and monstrous stepfather.

The relationship of Eleanor and Park doesn’t begin romantically – initially Park loathes her sitting next to him the bus, and she’s not very fond of him either. They find common ground though as she reads the X-Men over Park’s shoulder on their daily, silent school bus rides together. Their relationship plays out over the course Moore’s Watchmen — which Rowell deftly uses as both references and literary device to convey the greatest theme of the book, and of life.

Told in alternating chapters about the title characters, Rowell’s writing is balanced with perspective. She weaves in relevant references to late 1980s musical mixtapes and (most importantly) comic books that never feels dated or trying to hard. Rowell depicts race relations, socio-economic constraints, peer abuse, and love as they would be in reality. At times, I thought that the “love” component was expressed heavy-handily between Eleanor and Park. But then I paused, and reflected back on what it was like to be a teenager.

Ah, to be a stupid teenager – to be so sure and confident in everything and to know nothing.

Eleanor and Park know a little more about life (especially E) by the end. I’ll always remember finishing Eleanor & Park on the tarmac of the O’Hara airport, aboard my flight to San Francisco for Spring Break. The sun was warm, but Illinois in March was also very cold. I read the ending several times. I savored the perfect and imperfect conclusion. As Moore’s Dr. Manhattan concluded at the end of Watchmen “Nothing ever ends”.

Do you remember your first love?